Well, sorry that I haven’t posted anything in a while. I really don’t know how some of these blogger-types do it – whipping something together every day or so in order to keep their loyal fans happy.  For me it’s kind of a chore, actually. God forbid I ever get a job where I have a deadline.

I have a lot of catching up to do, so let’s go a few weeks back.

Lizzy and Sarah went to visit family in Hawaii a couple of weeks ago, leaving me behind to look after some homeowner issues, watch the cats, and do something referred to – rather ominously, I think – as “looking for a job.” Lizzy had to joke that, knowing me, it would be more likely that my days would be filled with sports, alcohol consumption, women of ill repute, action movies, empty pizza boxes, porn, organic hallucinogens and other manifestations of a middle-aged guy’s foray back into (temporary) bachelorhood, but I think she’s way off on this one. In fact, I made a mental note to prove her wrong by, at the very least, not ordering pizza.

The week alone wasn’t all fun and games; as alluded to above we had the brilliant foresight to schedule some needed home repairs while the girls were away. Minor things, like, you know, booking a plumber to do some serious work on several pesky leaks, and scheduling a fumigator to not only come and tent the garage and guest room in order to pump loads and loads of poison into a hitherto well-fed colony of termites, but to also perform what is called “heat treatment” on the main house in order to kill some less established critters. All in all, there were people in coveralls trudging around here at least five of the seven days I was to be “alone,” and, as the saying goes, every day spent waiting for a contractor to either arrive, work, or leave is pretty much a day spent without booze and porn.

The plumbers came and went at the beginning of the week, spending a good eight hours at the house. I had tried to get some writing done while they were here, but it proved difficult to concentrate. They seemed to delight in hollering at me every half hour or so from various points underneath the house, their disembodied voices requesting that I turn on a faucet, or flush a toilet, or drain the bathtub. Occasionally one of them would appear in the flesh, only to direct me to a dismantled bathroom where the aforementioned d. v. of the other plumber would inform me of newly discovered problems – problems that weren’t on the initial estimate but that nevertheless required immediate attention (naturally). At one point I remember some screaming, and something about a body or something under the floor boards – threats of calling the cops, and that sort of thing – but as I’m notoriously forgetful I can’t be blamed for having a hard time recollecting the details.

The very next day the fumigators arrived, and spent the morning covering every inch of the garage, guestroom and connecting deck with that lovely, striped tenting most of us have at least seen, if not experienced first hand. That was a blast, though I have to admit that much of the prepwork – emptying the rooms of any food, clothes, and tissues, wrapping or removing chairs and mattresses, sealing the freezer, making sure the corpses were completely hidden under a tarp – we had done a day or two earlier in order to make my life a little bit easier.

The tents were up for three days, and of course I was forbidden by law to enter any of buildings. Easily done when said buildings are the garage and a leaky, dusty guestroom, but I shudder to think of how the week would have gone if we had been forced to fumigate the house itself. The dreadful notion of having to prep, tent, and vacate the place  – with cats included – was the reason we researched the heat treatment. I mean, can you imagine how long it would take just to remove or seal all of the food? What about the clothes – would they have to be covered or packed up? On top of that, I’d have to find a hotel that would take cats. And what about the all the rare, hybrid Emu/Platypus eggs in the attic? Would they survive the poisonous assault? It boggles the mind.

With heat treatment, though, the homeowner can stay in the house and is only inconvenienced to the degree that he or she minds having large, space-aged looking tubes snaking through the house pumping 200-or so degree air into the attic and under the floors. Sure, the rest of the house doesn’t actually get that hot, but it sure came close – I’m guessing about 100 – 110 degrees. Of course I hadn’t the foresight to dress accordingly, and I was stuck sweating the ordeal out in the den wearing jeans and a black flannel shirt (the entrance to my bedroom was blocked by the tubing, so I couldn’t change into something more “heat treatment” appropriate). 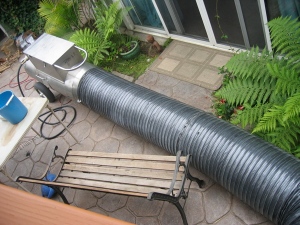 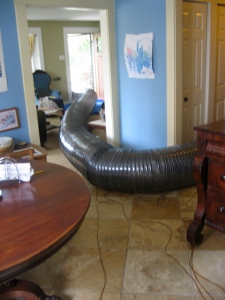 I made it through the week, though, even if it wasn’t they way I had envisioned it.  Don’t get me wrong – Lizzy and Sarah have gone off before, but usually we’re able to coordinate their trip with my working insane hours on some ghastly film; the point being that I wouldn’t be home to see them anyways. This time I had nothing scheduled, so it would just be me, the house, and my own mind.

Before they left, I had pictured myself spending the days of their absence quietly reflecting on my life while working the garden or polishing the woodwork; at night I would be listening to Dvorjak, sipping a rather chewy Sauvingnon Blanc and whipping up some rare sesame-coated tuna with balsamic reduction and roasted Jerusalem artichokes on the side. Later I’d be nestled in bed with a steaming cup of chamomile and a good hardcover – I’m thinking nonfiction, like “Salt,” or Pinker’s “How The Mind Works.”

But no, instead I spent the majority of the week tiptoeing around some contractor, feverishly devouring cheese while standing up half naked in front of the fridge, whimpering in the fetal position on the floor, mixing up and applying what seemed like tons of sodium hydroxide, or hunched furtively in front of the computer in the dark. Okay, so that’s not that different from any other day around here, but still – you’d think by now I’d have figured out a way to spend my free time more wisely. I tried to tell myself that any other (mostly) unemployed guy my age would be as equally unproductive under the circumstances, but judging by all the well-adjusted (and employed) looking chaps I see around town, I’m beginning to think that it’s not necessarily the case.

Oh, and the heat treatment in the attic? It destroyed every one of the Emu/Platypus eggs. Every damned one.

So much for my plan B.